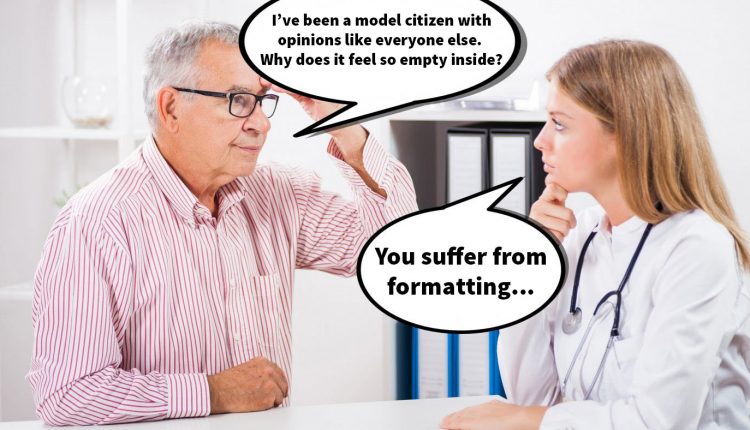 Every four years we have the opportunity to cast our vote. Meanwhile, we’re trying to keep up with the increasing pace of society, hear about the central bank’s inflation goals, feel some concern about the house prices, maybe get a new friendly manager, watch the Eurovision Song Contest, and get exposed to a huge media noise.

Repeating the same thing several times and expecting a different result can after a while become slightly amusing, at least for the spectators, and humor has the ability to change perspectives. This could be needful, since the belief that party politics will solve society’s problems may be a sign of strong mental formatting.

What is the meaning of “formatting”?

A hard drive in a computer needs to be formatted before it can be used. This means that a structure is created, which allows the computer to quickly locate information on the hard drive when it needs to be retrieved.

The way people are formatted is based on a similar principle, but the formatting is created in our consciousness through our unknowing. Human beings have the ability to see conflicts in rules and create their own structures, which a computer cannot. But when that ability isn’t used, our mind is formatted (ie, a structure is created) according to how someone else wants you to act and think, since you accept the information without reflecting on it.

This happens gradually over time and comes from several different sources. Family, school, mainstream media headlines, the TV (of course), the neighbor’s opinions, workmates and other social contexts.

The danger is that this is hardly noticeable over a longer period of time, and you rarely feel that you are in conflict with these rules because of social consensus. After a while, it will be natural to “fit in”. What is said on the TV is believed to be true, the tabloid headlines convey important issues, the division of people into political colors solves problems, and life gets better and better as the house prices rise.

What do you choose between?

An obvious sign of formatting is how important it is considered to vote. Therefore, in election times, you are expected to “take a stand” between the capitalist’s self-serving and performance-driven opinions versus the blue-collar workers opinions. An eternal struggle between two extremes, and the formatting, of course, include that there are no other views outside of these. Note all the reflexive responses that are brought out of most people if you question the ideological [idea-illogical] doctrines:

When you start to break your formatting and look past things like this, it can be difficult to support a system that demonstrably makes fewer and fewer people richer at the expense of more and more people. Because if today’s democracy had worked, shouldn’t this after a century go in the opposite direction?

Democracy should not be rejected

For any well-formatted people who might be reading this, just to clarify, this is not written to be anti-democratic. As in many other articles on this website, various topics are highlighted to indicate a larger problem, written with the hope that parts of the formatting will be abolished.

Unfortunately, many discussions result in accusations that The Free People’s Movement is anti-semitic, anti-democratic, tin foil hats, nazis, racists, conspiracy theorists and sectarian, when the dialogue is merely about banking reform, or exposing the guise of equal treatment through division.

The proof of substantial formatting is evident when this happens. It doesn’t feel good for many people to talk about what lies outside of their well-defined and subconsciously well-known structure. In fact, it becomes so uncomfortable that they would rather make baseless accusations and slander. Cognitive dissonance is another description of this.

Breaking out of the formatting

After a lifetime in this system, we are all more or less formatted. Do you want to break your formatting? The way it’s done is by thinking independently and becoming aware of what is trying to sneak into your mind. On this website, we inform about the understanding of and the conditions for a functioning democracy.

If you want to be a citizen that follows the stream, well-formatted with opinions like everyone else, then you should ignore the doctors diagnose according to the picture above. If not, your choice begins with individual, aware, informed and most important free thinking. Don’t let any book, ideology or anyone else think for you!