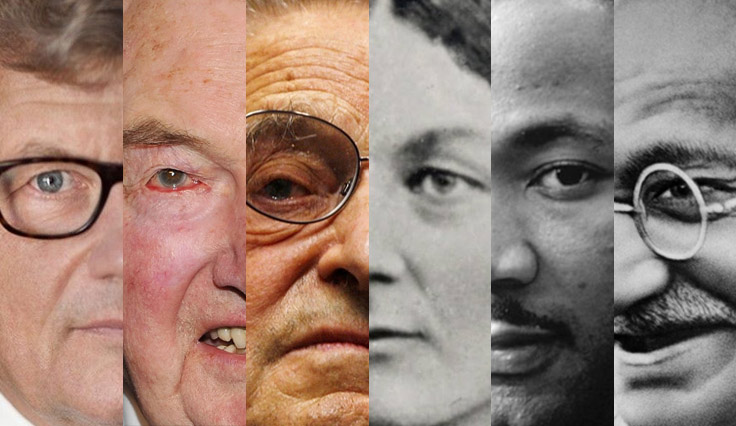 If Jacob Wallenberg, David Rockefeller and George Soros were to choose a joint representative, what will distinguish this representative from one whom Gandhi, Martin Luther King and Florence Nightingale would choose?

The first three will probably choose someone they have control over and can manipulate, even blame if something goes wrong, while the last three probably choose among themselves the one with the most wisdom, that also accepts full responsibility in their position.

The first three seem to prefer to be mostly hidden from sight, the latter ones put themselves in the front and let their inner qualities show the way to millions of people, all the way to their last moment in life.

Hopefully, it is obvious which of these have the best leadership qualities. Why then do scandalous, corrupted people end up being the highest representatives of people in society? Questionable characters who uphold status quo and move on to a well-paid finance job when the political career is over.

Today, this happens because the banks’ money regulates the economy that controls the politics, which means that we do not have democracy in practice. But even if people would understand this tomorrow, it would take at least a decade of elections and law modifications for a change to take place on a parliamentary basis. Quite slow when a shrinking number of people owns more than half of the world, and the gap widens every day.

This inertia is promoted as the “best system we have”, upheld by the worst leaders who have existed in modern times – puppets, manipulated by financial interests and with sufficiently high wages and low morale to continue wanting it so. People who stick to political isms, because the hollow, polarized content of these assures their place in the game.

Party politics is a structure and a facade that ensures that this partisan game, and thus the banks’ power over society, continues. No parliamentary party has a monetary reform on the agenda, and the parties do not promote any radical ideas. We’ve seen it countless times. Motions are presented and voted down on oligarchic party congresses. Individual members standing up are basically committing political suicide. In the parliament, smaller parties are immediately blocked in issues that involve major changes, since 99% of the MPs vote according to the party line.

Talking about solutions before enough people understand the problem is basically meaningless. It prevents individual understanding, and those who are satisfied with the current system – happy to have more than others – will slander the solutions, its representatives of course, and criticize technicalities.

Therefore, I hesitate to introduce an alternative to party politics, because I have never seen such an entrenched belief that society will improve “if only the red/blue block gets into power for another period.” The only political “alternative” that exist in people’s minds are the most extreme and devastating examples such as fascist dictatorship and communism.

Yet, in this stagnant state I would like to tickle the imagination a little. It will not be a solution to all problems, the individual must evolve even if there is a Gandhi, Florence Nightingale or Martin Luther King on all representative posts in politics. But hopefully this idea can contribute something that does not exist today; a way to get the wisest people with the best leadership qualities to the higher political positions, rather than the other way around. What exactly these positions should be is not important. It is an idea that is presented, not a given structure.

As said at the beginning, the difference between the finance elite and, for example, Gandhi, is that he stood at the front and took full responsibility for his actions. Responsibility is thus an important characteristic. So what about people’s responsibility?

What location makes people actively engaged, if not their home! It should be nice and tidy, the lawn should be cut and dinner should be ready at the same hour every day. Small and large repairs on the house are done quickly and efficiently. It is seldom you walk through a residential area and do not hear the noise of an electrical tool, which testifies to a great responsibility that the home should be in good condition.

The area where people really care is thus within their own plot of land and the neighborhood (so the house prices do not drop…), outside of that area it lessens very quickly. Doesn’t it make sense then, that it’s within this area that a representative should be chosen?

When people vote for someone in an area where they feel personal responsibility in practice, not just by clicking “like” on some Facebook page, then the values ​​also become different. In today’s parliamentary elections it hardly matters, you see a smiling person on a poster that speaks the party’s opinion, it rarely matters who it is. If you choose a representative for your own little neighborhood however, wisdom and inner qualities become very important, rather than political inclinations, and you know the neighbors in a completely different way, and therefore you can make a much better choice.

So the first step is clear, people vote for representatives at a very local level, one city block or a village for example. Now comes the second step, which is to let these representatives among themselves vote for a representative for a larger area, let’s say a small suburb.

With this, something has changed radically compared to today’s system. Now the most responsible and wise people choose the one they think is wisest of them! Remember, all of these are voted by the people at the most personal level possible. Better selection cannot be found, and in this second step this selection is precised.

After that, the representatives of those districts go on and vote among themselves one or more representatives, of a whole city for example. Once again a selection to bring out the best of the best. And so on, right up to the highest level, which would then include the wisest and most responsible individuals in the country.

There we have the basic idea. As mentioned, the details are irrelevant, the important thing is that the imagination gets started, and the mindset that there are actually alternatives to the current system and the world it has contributed to.